BEHIND THE RIFFS: TWO SIDES OF THE STORY

The song starts with Mikko's ballsy riff that he has composed a way way back. Cool riff and reminds me of Testament – thus the working title. This riff is actually the only structural composing contribution Mikko has on this album, although on Pitch Black his riffs were widely used.

It would probably make our band more interesting if I would now say that we had musical differences and I refused to take any more of Mikko's material to the album or something, but the boring fact is that he just hasn't produced any new riffs or song parts in a while. But he do gets to show his creativity on the solos, which are in my opinion better than on the first album, even though there was nothing to complain about the Pitch Black's solos either.

And about the guitar parts; I played some solos on Pitch Black but this time I left basically all of those to Mikko – he is a way better solo shredder than me, so better to let him handle those then. I play some small leads here and there, but the ground rule on this album is that I handle the rhythm guitars and Mikko is the one shredding on the solos.

Mikko's riff is followed with my stuff and I do enjoy the verse riff. Well, the pre-chorus one isn't that bad either (the self-righteous bastard that I am). Verse kind of feels like something Dukes-era Exodus could have done. And pre-chorus has some The Haunted -feel in it (on the guitar riff that is, of course adding keys and such changes the atmosphere). So the whole song is clearly a complete rip off!

I like the fact that the song kind of has two choruses. "And when the smoke clears..."-part was first meant to be used only once, but it felt like it could be repeated at the end also. And it turned out to be a nice climax for the song.

I think the working version of this song was one of the first post-Pitch Black -things that I played to the other guys of the band. I create the songs using Guitar Pro and I still use the original MIDI sounds on it – not using RSE because I've worked with Guitar Pro's MIDI sounds from 2002/2003. Old school, I know. But if a song idea sounds good as MIDI, then I know it will kick ass when it's played with the real instruments.

But anyway, the rest of the guys in the band don't necessary always get the idea when it's played to them on such a simplified output. Maybe their minds aren't as simple as mine. But with that "second chorus" of Two Sides of the Story they seemed to really enjoy the melodies in the vocal and guitar dialogue and wanted to hear it again and again. And that reaction is something really exceptional, because normal reaction to a whole song is either silence or something like "joo-o..." (basically "yep...").

I really like the vocal part of the interlude. Those harmonies worked out great.

By the way, this is the only Rifftera song that contains a dirty word. Some real hardcore stuff! Luckily no one probably understands what I'm screaming, so the children will remain safe.

In addition to the dirty talk the lyrics of this song are probably the most straightforward with their meaning. The starting lines already lay everything on the table; "two sides, two truths – both lies so which one you choose?" That's how the story tends to go nowadays. There is no middle ground. 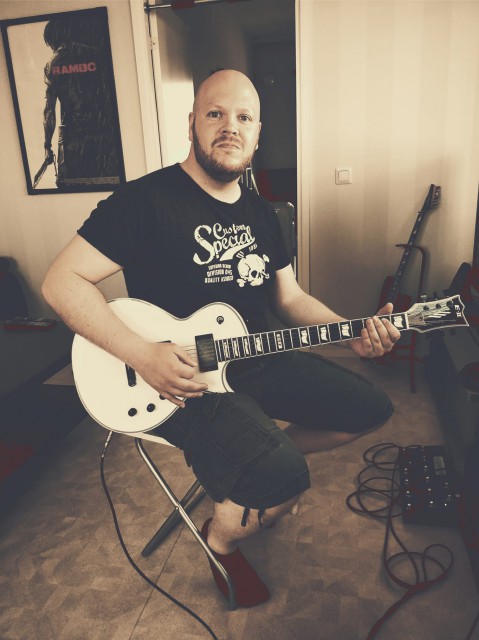 TWO SIDES
TWO TRUTHS
BOTH LIES SO WHICH ONE YOU CHOOSE?
WRONG-HEADED EXAGGERATION
TEARING DOWN A WHOLE NATION
SEEDS OF WASTING DREAD
PROPAGANDA FUCKS UP YOUR HEAD
THESE LITTLE PSYCHOPATHS
INCESSANTLY RANT THEIR RABID WRATH

ARM UP
WE MUST
SEPARATE THE WHEAT FROM THE CHAFF
YOU ARE WITH US OR AGAINST US
CAN YOU FEEL THE BLOODLUST?
OUTBREAK
DOWNFALL
THIS WILL BE SETTLED ONCE AND FOR ALL
YOU LIVE AND DIE BY THE SWORD
YOU'RE JUST A GAME PIECE ON A BOARD