BEHIND THE RIFFS: BURNING PARADISE 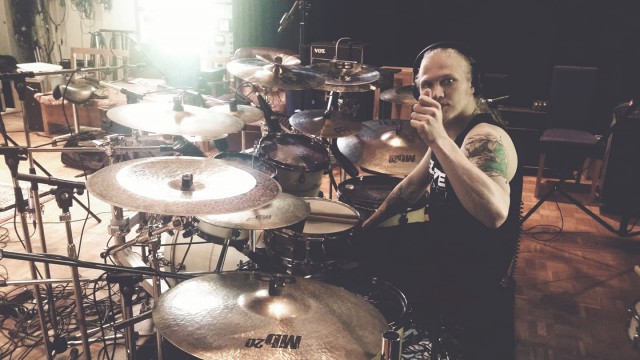 When Ville joined the band it came quite clear that he likes to play fast. And he likes to play blast beat. I then once basically asked him to name a tempo in which blast beat is fun to play and then I started to work with a new song based on the reply. My typical riffs and song ideas tend to always be around 190 bpm for some reason, so the 220 bpm guideline given by Ville made me think a bit out of the box. Especially the verse-riff was a direct result of that. And the result sounds pretty evil, so I probably should try this kind of approach more often.

Back in the days me and Janne used to play Battlefield 1942 and I really liked its theme song. From time to time during rehearsals while jamming I played it and one time using the same sound I just started to play something similar-ish. Apparently Janne liked what he heard as he asked me to play it again and recorded it. He then changed the rhythm a bit and extended it with some modulations and that's how the intro for Burning Paradise was born. Also I bet the working title for the track is not that hard to guess.

Antti's Battlefield-nod was a fitting frame to this idea of a hard hitting intro that is just based on abusing the (open) lowest string. Well, like abusing it even more than we usually do with our riffs. The ground rule in our rehearsals is; if you are not sure what you should play then just hit the open D and you'll be right 90% of the time. That's pretty much the story with our songs.

The intro came out just like I wanted. Heavy as fuck. I could see a huge crowd banging their heads and fists on that intro. In my dreams that is.

The riff played before and after the first verse reminds me of the ghost ship scene from The Moomins, because of the organ duplicating the guitar riff. This is the most brutal song that we have done and still it makes me think about The Moomins. We are clearly still not brutal enough.

As a counterpart of the song's evilness (evil Moomins) there's of course the softer melodic parts. The whole interlude-section is based on one old demo. Especially the easygoing riff played on the back of the solo is something that creates a nice contrast with the verse-riff. And I think that with a bit different arrangement the chorus could be on The Offspring's late 90's albums. Just lose the keys and put Dexter to sing it.

The solo of this song was probably the one we worked the most with. Well, Mikko worked and I commented. Mikko sent something he thought was good and I then said that you can do better. The cunt I am. I can remember him having some weird Steve Vai -thing going on there at one point. Nothing against the great Steve Vai, but it just wasn't working as good as it could. But now we can hear that the result was worth of all the trouble. Although Mikko probably didn't sleep in many nights in a row while working with this (nights are the only time he gets his solos done).

Vocally I really pushed the limits and took my voice to the lowest possible frequencies. My vocal technique is... not something that could be called pro. During the years I have learned how to do my screams so that it (normally) doesn't cause discomfort to my throat and my ability to get down to the low frequencies have definitely improved a lot in the recent years. But the recording of the verse didn't feel good at all, because I pushed my voice so low that I didn't even know I could reach there. I really do like how the result sounds on the record, but I should probably figure out a way to do it without killing my throat.

Even though composing whole songs can be a pain in the ass, writing lyrics is the thing that I struggle the most with. And it took a lot of time to get all the lyrics written for this (kind of concept) album, but I sure am proud of them. I don't really want to explain what I specifically mean with my lyrics, but I think you don't need to be specialized in lyrical interpretations to see what's going on with this song. 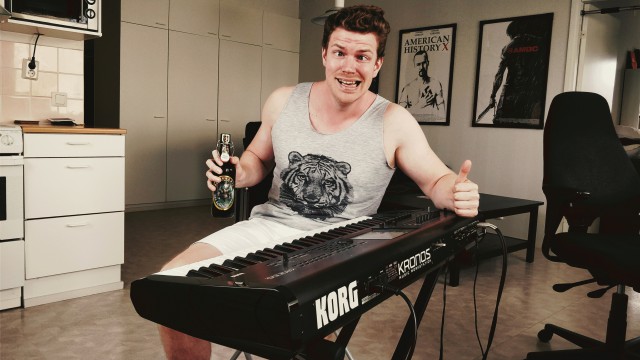 ANOTHER STEP TOWARDS INHUMANITY

BETTER BLOCK THE DOOR
REINFORCE THE WALLS
BARRICADE THE WINDOWS

DO NOT GIVE INTO FEAR
BURNING PARADISE

BETTER BLOCK THE DOOR
REINFORCE THE WALLS
BARRICADE THE WINDOWS